Please watch the accompanying video for this case study on the BBC website BEFORE continuing with this lesson. 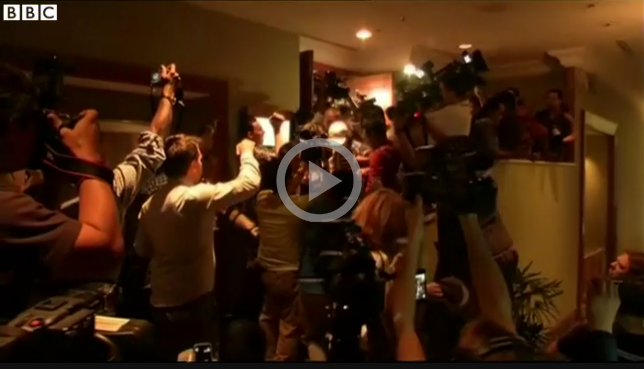 They were attempting to speak to Chinese journalists outside the daily press conference in Kuala Lumpur.

A BBC reporter was pushed away from the relatives, who were carrying banners criticising the handling of the case.

Teams from 26 countries are trying to find flight MH370, which went missing on 8 March with 239 people on board.

One of the relatives, a middle-aged woman, cried: “They give different messages every day! Where’s the flight now? Find our relatives! Find the aircraft!”

The Malaysian government said later it regretted the scenes and ordered an investigation, saying “one can only imagine the anguish they are going through”.

During the daily briefing, Malaysia’s acting transport minister rejected reports that emerged on Tuesday that the plane had been spotted in the Maldives.

A local councillor on the island of Kudahuvadhoo has told the BBC that about 10 people described seeing a large aeroplane some hours after it disappeared.

The acting transport minister, Hishammuddin Hussein, also said the authorities had investigated almost all the passengers and crew of the plane, but had so far found no information of significance.

“We have received passengers’ background checks from all countries apart from Ukraine and Russia,” he told reporters. There were two Ukrainians and one Russian on the plane.

Malaysian police chief Khalid Abu also said some data had been deleted from the flight simulator found at captain Zaharie Ahmad Shah‘s home on 3 February, and that investigators were trying to recover the deleted files.

Mr Hussein stressed the captain should be considered innocent until proven guilty and that members of his family were co-operating with the investigation. Deleting files would not necessarily be suspicious, particularly if it were to free up memory space.

Chinese citizens made up the overwhelming majority of the passengers on the plane, which had been heading from Kuala Lumpur to Beijing.

Responding to complaints among relatives of those on board that they are not being kept fully informed, the Malaysian authorities said they would send a team to Beijing to liaise with Chinese families waiting for news.

Police in the Maldives have said they are looking into local reports that a low-flying aeroplane was sighted above Kudahuvadhoo, south-west of the capital Male, around 06:15 local time (01:15 GMT) on 8 March and that its colours matched those of the missing plane.

The Maldives National Defence Force said that although nothing had been detected on its radar, it would provide any assistance needed for the search.

If the plane was indeed flight MH370, it would have flown far slower than normal, in order for the timings to be possible, reports the BBC’s Charles Haviland in nearby Sri Lanka.

The main Maldives airport is one of those featured in the flight simulator discovered at the home of the captain.

The Malaysian authorities have said the evidence so far suggests the Boeing-777 was deliberately turned back across Malaysia to the Strait of Malacca, with its communications systems disabled. They are unsure what happened next.

Investigators have identified two giant arcs of territory spanning the possible positions of the plane about seven hours after take-off.

This is based on its last faint signal to a satellite – an hourly “handshake” signal that continues even when communications are switched off. The arcs stretch up as far as Kazakhstan in central Asia and deep into the southern Indian Ocean.

Investigators are considering the possibility of hijacking, sabotage, terrorism or issues related to the mental health of the pilots or anyone else on board.

Previous Lesson
Back to Lesson
Next Topic